You Are Here: Home > Latest News > Clipper Double On The Cards

Clipper Double On The Cards

The grey silks of Clipper Logistics, owned by Steve Parkin, are one of the most recognisable in racing. They can be seen throughout the country and have donned some top quality horses throughout the years. Kevin is part of the training roster and added a couple of winners as Ancient Times and Queens Order provided an across the card double.

Promising debut, complete mishap and then a far better effort were the story of Ancient Time’s first three career starts. The Exceed and Excel colt had shown ability, shown promise and fulfilled that on his AW debut. At the fourth time of asking, Ancient Times broke his duck when taking the 5f Visit attheraces.com EBF Maiden Stakes at Southwell.

Starting his career at York, in a small field York novice, Ancient Times finished 3rd to two smart rivals. The winner was to go on and win again next time out, earning a mark of 81, whilst the runner up has put in some fine efforts in pattern company, now rated 98. It had looked a good race and the form proved it. Ancient Times looked to be a likely winner next time he stepped out on to the track.

Pontefract was a race that was one to put a line under. Again Ancient Times showed good speed but then inexplicably hung across the track coming round the left handed bend. It was a very strange showing but Kevin immediately felt the fast ground may have been the reasoning behind it. So when Ancient Times returned to the Knavesmire it was no surprise to see the colt bounce back and run well in another decent novice race. Although he hadn’t managed to get closer to winning, Ancient Times had shown greeness and was likely to improve for his third run.

This time of year plays havoc with plans and entries due to the indifference regarding ground conditions. The rain has been coming down and soft, or even worse ground has come. It is always hard but especially so for the youngsters as some will have never experienced the testing going. Fortunately there is the AW and Kevin turned to the Polytrack for Ancient Times. He would line up at Southwell against 11 rivals and the rain would actually be a benefit for this track, with moisture helping to tighten up the surface.

As one of only two runners in the field with a handicap mark, running off 73, it was easy to see the standard needed to win the contest. It was always felt that Ancient Times was better than his opening assessment and it looked as though the punters agreed, sending the colt off 3-1 second fav. Danny Tudhope, who is retained rider for Clipper Logistics, took the ride.

Southwell’s straight 5f usually sees a strong gallop and this would be no different. Jumping well from stall 10, towards the near side, Ancient Times was quickly into stride. Unlike some of his rivals the colt was straight to the fore with ease, showing plenty of natural speed. The field was spread right the way across the track and the lead was shared by 3 or 4. Ancient Times was in front of the ones down the near side as they charged through the first furlong.

Danny was riding with soft hands as he let Ancient Times use his speed. Through 2f he took up the lead, holding a narrow advantage over the favourite Jacattack and tracked through by market rival Shaykoon. Ancient Times was having no trouble with his first try on the surface and strode on as the round track joined the straight. This took the field past the halfway point where the pace had found out a few of the runners. There was a distinct break with half of the field pulling clear by 3 lengths, spearheaded by Ancient Times.

Ancient Times was the last to come off the bridle as Danny began to work away passing the 2f pole. The fast pace would ensure the last couple of furlongs was a test but Ancient Times had daylight in front of him. Whilst the rest were coming under stronger pressure, Ancient Times lengthened for Danny who was pumping away hands and heels. The field began to stretch and there was only a few of the runners who were making any inroads.

The track separated Ancient Times from his main danger Barbaroma as they headed inside the final furlong. Having burnt off his nearest pursuers it was the far side challenger who was now beginning to finish his race off. Danny was still relaxed in the saddle and had not really posed any serious questions but knew he had to get a little more serious. Ancient Times kept on well for pressure but was going to be challenged all the way to the line. The finish was between the pair but Ancient Times had plenty left in the tank. Danny still looked supremely confident with 50 yards to run as he had barely touched the colt. The confidence was correctly placed as Ancient Times strode out and repelled the challenge to earn his first win by 1/2 length. 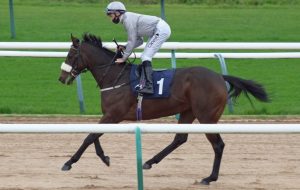 The evening presented another winning opportunity on the AW. It was a longer journey all the way down to Chelmsford but it was a bounce back to wining ways. Queen’s Order is a naturally very quick filly and she showed all that ability when wining the 5f tote.co.uk Streaming Every UK Race Handicap.

During her 2yr old season last year, Queen’s Order gained a win on her second start before being tried in pattern company. That showed the regard she was held in and it would also mean that her opening handicap mark would be 89, fair on the face of her form. Kevin was keen to see what she could do with another year on her back.

Queen’s Order had raced exclusively over the minimum trip but would try 6f for the first time as she returned to action. Unfortunately it didn’t suit and Queen’s Order would return to the sharper test from July. She went on to finish third on her next couple of runs which were ok runs but connections did expect a little more. Below par next time out at York, where she anticipated the start and banged the front of the stalls, Queen’s Order then again filled the third place spot at the St Leger meeting.

Although there were a couple of good efforts throughout this season, ultimately Queen’s Order had been a bit disappointing and seen her mark drop to 84. She is a very fast filly and Kevin wanted to utilise that so with soft and heavy ground coming into play he turned to the AW. Chelmsford is a track that looked likely to suit so Queen’s Order was declared to tackle the 0-90 handicap. In a bid to get the best out of the filly, Kevin tried blinkers for the first time.

Lining up against older horses, in a field of 12 runners, Queen’s Order was seen as one of the outsiders at 16-1. That being said she was one of only three 3yr olds, who were the most likely to improve. Queen’s Order was the most likely with a first try on the AW surface and first time blinkers. Kieran Shoemark, who is now Clippers second jockey, was booked for the ride which would be the second time he had had partnered Queen’s Order.

Fast is the only way to describe Queen’s Order and she can maintain it. This means there is only one way to ride the filly and Kieran had learnt this from last time with the filly. Jumping from stall 5, he rousted her along to go forward and get into stride. Queen’s Order did take a little bit of urging and would need all of the first furlong to get to the front. It was key get there because passing the 4f they hit the left handed bend. Fortunately she had done enough and lead the field as they began to swing left.

Pressed for the lead, Queen’s Order was setting a strong gallop but held a 3/4 length lead over Top Breeze who looked happy to sit not eh girths of the leader. Kieran was ensuring the keep the revs up without forcing the issue and his mount was enjoying herself with daylight in front of her. The filly kept turning the screw on the front end and took the field into the second half of the race with a length lead and started stretching the field out.

Positivity was the play coming from the saddle and Queen’s Order was baring down on the straight with a clear advantage. There was no taking back and having allowed the filly to stride on, Kieran was getting a little lower in the saddle ready to use the bend. As they passed the 2f marker, Kieran began to kick into action and tried to use the bend as a slingshot into the home straight. It had the desired effect as Queen’s Order kicked from the front and edged out a slightly bigger lead. She had gone very hard from the off but at present there was no signs of slowing. Top Breeze had given chase all the way and tried to cover the move but didn’t quite have the initial speed of the filly.

Queen’s Order was making the best of her way home and had a clear lead as they entered the final furlong. It was still Top Breeze who gave chase and this had turned into a two horse race. Nothing else was getting into the contest as Queen’s Order was now trying to hold on to her advantage. Kieran now got to work to try and keep his filly moving forwards but she was starting to pay for her electric speed earlier. The stride just shortened slightly and her constant rival, Top Breeze, just began to close the gap. Thankfully she was not only quick but tough and Queen’s Order dug deep. The lead was slowly closing but Top Breeze wasn’t closing it quick enough. Under a strong drive, Queen’s Order was always holding her counterpart and secured the win by 1/2 length.

It was great to get the filly back to winning ways and this win will see her gain a rise in the handicap one again. She is an extremely quick filly who wants decent ground so that may be her finished for the year. Queen’s Order will only get stronger next year and she looks to be a nice filly to look forward to going forward in the sprinting division.