Recently the form of the yard has been red hot and there has been some very smart performances. One horse that was yet to be seen was Repartee and everyone was looking forward to the 3yo getting back to action. Good things come to those who wait and Repartee earned a first patter success when taking the 6f Bombardier Golden Beer Carnarvon Stakes at Windsor.

Repartee burst on to the scene with his debut run and went into many people’s notebooks. With Kevin sending him to York, which is one of his favourite tracks for 2yo’s, Repartee bolted up at the first attempt. Following that debut win the Invincible Spirit colt went to head of the betting with many firms for Royal Ascot but Kevin decided to side step the meeting to give his colt a little longer to mature. Unfortunately when he took the step up to listed level in July the weather turned and Repartee got stuck in soft ground.

The Gimcrack stakes had always been earmarked for Repartee and despite his defeat, Repartee was sent back to the Knavesmire for their 2yo highlight. Although beaten in the Group 2 event it was a fine effort and showed that Repartee was definitely up to pattern level. Kevin had a few decisions following that performance with a feeling that Repartee might well be suited to a touch further than the 6f he had run over. It was decided that the the big Weatherby’s sales race at Doncaster could be ideal for the colt. An extra 1/2f would see Repartee run over 6 1/2f for the first time. After jumping a little slowly the colt travelled well, quickened up and powered home. Repartee just failed to get up, finishing 2nd but was an unlucky loser with the ground given away at the start costing him.

Having strengthened up over the winter, Repartee’s work was impressive as ever during his pre season. Kevin’s idea was to try the colt in a trial over 7f which would give connections an ideal plan for the season. Unfortunately this went completely out of the window with the lockdown but there was one race that would be perfect for Repartee’s return to action. The 7f Jersey Stakes at Royal Ascot was selected and Repartee was declared for the Group 3 contest. This time, Mother Nature decided to get involved and rainfall turned the ground soft and testing. Kevin had no choice but to withdraw Repartee knowing that he didn’t go on it last year.

Repartee was in great order but had yet to see a racecourse and immediately Kevin searched for a race. It would be 8 days after Royal Ascot but just down the road at Windsor where Repartee would finally be able to get to the track when he went down for the 6f Listed event. He would be taking on his 3yo peers as only 6 were declared for contest but he wouldn’t be the top rated for the contest. Dark Lady had won a Gr3 last season but would carry penalty for that success and this would see the punters latch on to Repartee. With regular rider Andrea Atzeni in the saddle, Repartee was set to be sent off as the 13/8 fav.

Knowing the horse, Andrea was left to his own tactics. Connections were not 100% sure as to the colt’s perfect trip so it would be interesting to see the early stages of the contest. Repartee jumped well and was quickly into stride but he was soon pressed and passed by a trio of rivals. Above shot up the inner with Maystar and Istanbul going forward on the far side. Andrea didn’t force the issue and took the lead offered to him, settling Repartee just in behind the overall leader Above. It was a very strong pace as the field raced away from the rail where it kinks out. Market rival Dark Lady was at the rear but tracked Repartee’s every move through the early stages.

There was no hanging about and Above forced the issue moving on down towards the 4f marker. As the track straightens up, Sean Levey shifted across to rail, followed by his colleagues so the 6 runners were racing up the stands side. Now the field were racing in pairs as Andrea continued to follow in the leader’s slipstream with dark Lady doing likewise to him. Repartee was travelling smoothly and they were quickly on down towards the halfway point.

When they raced past the halfway stage the cutaway kicked the runners out a little from the rail and this would have a telling effect. The leaders would soon kick for home but the 6 runners fanned out a little thanks to the track and it would be unlikely that there would be any hard luck stories. Andrea just got lower in the saddle 2 1/2f from home, asking his colt to lengthen, readying him to lay down a challenge. Passing the 2f marker Repartee  was still travelling well as his rivals were coming under increasing pressure from the saddle. Andrea was now angling out to get a clear run for when he was ready to press the button.

Heading down to the final furlong the race had opened up. Andrea was cajoling his mount along with his partner lengthening out for him as he asked. The rest of the field were hard at work, especially Dark Lady who couldn’t go with the fav. Andrea was just using hands and heels as they moved into the final furlong. Having come through with relative ease, it was now that Andrea asked Repartee to put the race to bed. Above was proving brave along the rail but Repartee snatched the lead away with 150 yards to run. Andrea kept him up to his work but Repartee was getting on top. The further they went the more he could stretch out and didn’t require much urging. Repartee was always holding Above and was starting to go away as they drew close to the line. The winning Margi of 3/4 looked like the bare minimum as Repartee recorded his second career win and first in pattern company. 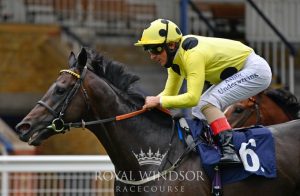 Repartee has been held in high regard from day one and it was great to see him back with a bang. Although he had some high class form last year, there was still a feeling that he may be better at 3yr old when he could strengthen up. He was always travelling well and won with the minimum fuss as Andrea only hand to ride him hands and heels. Repartee will improve for this run and it will be very interesting where he could head to next time out. The positive is that he showed good speed before staying powerfully towards the end of the race. Options will be plentiful for Repartee but one thing he has shown is that Group company will be around the corner.