You Are Here: Home > Latest News > Change Of Code Sees Kajaki Back To His Best

Change Of Code Sees Kajaki Back To His Best

Last season Kajaki proved to be one of the most consistent performers. From his eight runs, he produced two wins and four seconds. With that year everything was looking promising going into 2018 but unfortunately Kajaki hasn’t proven to be quite on the same form. In a bid to recapture some form, Kajaki switched codes and he made a faultless start to his hurdling career by winning the 2m1f Casinos At totals.com Maiden Hurlde at Sedgefield.

Everything has been tried this year on the flat. After a few below par efforts headgear was applied, change of tactics were implemented and nothing seemed to work. When a wind issue was found early in the season and a op was performed it felt as though the key was found to the poor efforts. When the same results continued to follow it became clear that Kajaki was not enjoying his racing, throwing the towel in with very little effort. In a bid to freshen him up mentally Kevin brought in Brian Hughes to school the grey. He proved to be a natural and it was clear that he would have a future in the NH sphere.

Now seemingly a bit more interested at home, following his schooling session, Kajaki turned in his best run of the year. It seemed to be the ideal cure for poor form but unfortunately Kajaki quickly went backwards next time out. Immediately following that run, Kevin decided that Kajaki would be going hurdling next time out.

Jumpers are not what Kevin looks for but when he has one that fits the bill he has a very good record first time out. Sedgefield is a track that he does look at regularly to start them out at and when the maiden hurdle came up he quickly decided to aim Kajaki there. At home he had been foot perfect so now he just had to test himself at the track. Brian Hughes is always the man that Kevin calls on and once again he was booked to partner his runner. Having done all the home work Brian knew Kajaki better than anyone and all was left in his capable hands.

Having reached a career high mark of 84, it was clear that Kajaki was a talented individual. If he could transfer his flat form to the jumps then he would be a nice prospect going forward. Kajaki was backed into a short price favourite of 6/4 to make it a winning NH debut.

Lining up the 9 runners had 8 obstacles ahead of them over the 2miles. As the tape lifted Brian was positioned in the middle of the bunch. When Rock N Rolla went on to take the lead, Brian quickly moved to track the leader and sit around 3rd or 4th place. Racing towards the inner of the group, Kajaki would take the shortest route possible. Popping over the first, Kajaki made a nice start and travelled easily through the early stages.

There were no casualties as the field took the second then the third hurdles. It was a fair gallop being set and being used to the flat Kajaki was easily able to travel. Although tracking the leader, Brian always had Kajaki far enough back that he got a good line of sight for each hurdle. The grey brought his home work to the track as he was foot perfect over the first four hurdles, taking them with efficiency and allowing him to land straight back into stride.

Little changed throughout and as the field bared down on the fifth obstacle Rock N Rolla continued to take them along. It was here that Kajaki made a slight mistake, just getting in a little tight. It was a minor mistake but one that needed a response. Brian just had to hustle his mount along and regain the balance and momentum lost. Kajaki responded well, quickly getting back into his stride and closing in on the ground lost momentarily.

After 3 out the lead changed hands with Ask Paddington taking over and pressing on. Now the pace increased and with Rock N Rolla soon weakening the race started to change in complexion. Kajaki still went well and Brian moved him closer now sensing the new leader was soon to kick for home. Snookered made the same move from midfield and now the race split into two with this trio moving on as they headed to 2 out.

Ask Paddington was kicked on going into the penultimate hurlde but on his inside Kajaki was cruising on the bridle. Snookered gave chase just in behind as the trio took the hurdle and raced on towards the last. With minimal fuss Kajaki edged into lead as Ask Paddington was now hard ridden. Snookered gave chase but Kajaki now started to assert. Brian was just nudging his mount along as their lead grew to a couple of lengths. Being held together Kajaki bore down on the final hurdle with a nice lead. He wasn’t to fluent over the final flight, possibly due to a loss of concentration but he got over it safely. His two rivals were a lot quicker over and for a second the lead closed. Brian gathered his reins, got Kajaki balance again and then kicked him for home. Now on the flat Kajaki quickened up smoothly and immediately put a few lengths between himself and the pair who were battling for second. Seeing out every yard of the trip, Kajaki ran out a comfortable 5 length winner. 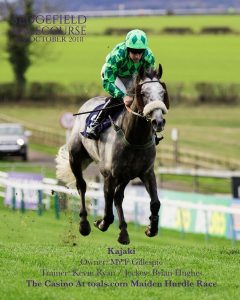 It was a very polished performance from Kajaki and he won with plenty in hand. There were a couple of minor blips but his jumping was very good. Owner Frank Gillespie has had some nice NH horses in the past and Kajaki does look a very promising prospect in this sphere. Connections will need to sit down and decide where to go next with Kajaki but now he has shown ability in both codes the options really open up.