Catch Cunningham Back To Form 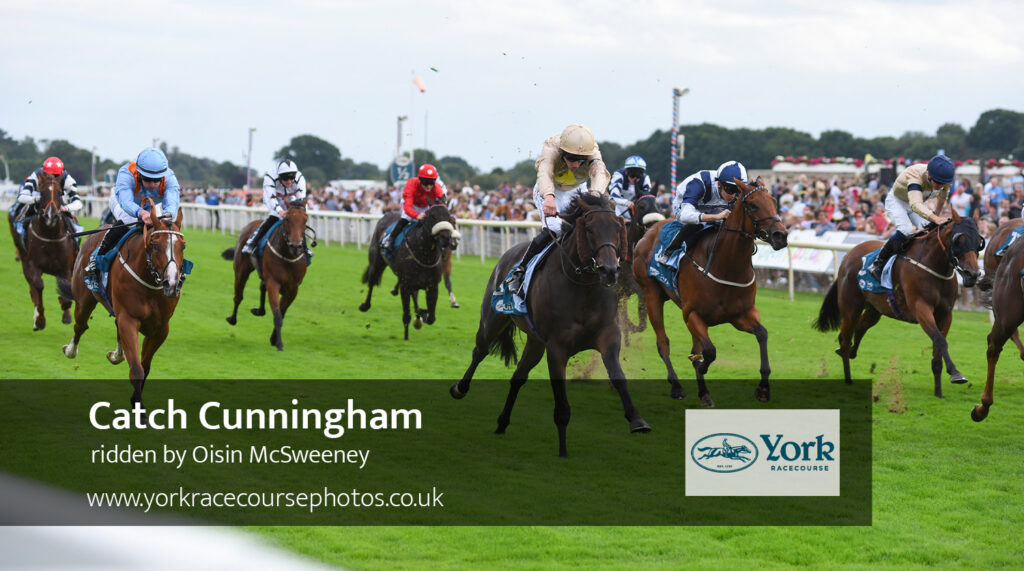 York is a special racecourse to the the yard and this season has been another successful one on the Knavesmire so far. Sat second in the race for top trainer award, Catch Cunningham added one more to the tally when he took the 5f Firmament Apprentice Handicap.

Starting this season off a mark of 80, Catch Cunningham looked like the type of sprinter who could improve through the ranks. Now a stronger physical, the gelding began with a good runner up spot on his return. Unfortunately that was as good as it got throughout the summer months, although he only had three runs. With the feeling that ground may be the cause of a small slump, Catch Cunningham waited and then bounced back to some form around Chester.

The Ebor meeting always used to round off with a top 3yo apprentice handicap but sadly it changed to allow all jockeys to ride. It mean that this race was used instead, to give apprentices their chance to shine. It was the obvious race to aim for, especially when the team’s talented apprentice, Oisin McSweeney, could take the ride. The pair had experienced the Knavesmire early in the season and lined up against a similar field of 15 this time around.

Cheek pieces were retained and Catch Cunningham was well away, racing towards the near side. Although showing good speed, he would actually be chasing a fast pace and settle into second place through the early stages. York does lend itself to fast horses but this was a especially strong pace even by the track’s standards.

Many of the field could be seen struggling a long way out and heading past halfway saw a few drop away out of the race. Catch Cunningham travelled sweetly throughout and gave Oisin the time to sit and wait for his challenge. The leader was not letting up in front and was continuing to pour it on despite the break neck speed. Although they had raced near side, the leader and Catch began to edge over to the centre of the track with those on the far side coming into the contest.

Catch Cunningham probably lost at least one position when moved into the final 2f and this is when Oisin began to get to work. He had definitely been shuffled back and was not immediately responding to the urges of his jockey. Still the leader strode on and Catch Cunningham was running out of time as they approached the final furlong. It was here that the 3yo began to find and move through the gears. At the time it may have been a little worrying but Oisin dropped his whip at this stage and was left to a hands and heels approach. Thankfully for connections both horse and jockey were working in unison and really motoring. Catch Cunningham picked up and with 50 yards to run he had moved up to join the long time leader. There was no chance of a response and Catch Cunningham had all the momentum. Snatching the lead he flew past the line to secure a neck victory.

Catch Cunningham has taken a little time to come back to himself this year but it seems as though staying away from quick ground might just be the key to this gelding. He showed a great attitude to pick the winner up late on and a stiffer 5f may be even more suitable. With ground likely to suit he can have a nice Autumn campaign and Catch Cunningham could be still open to more improvement.