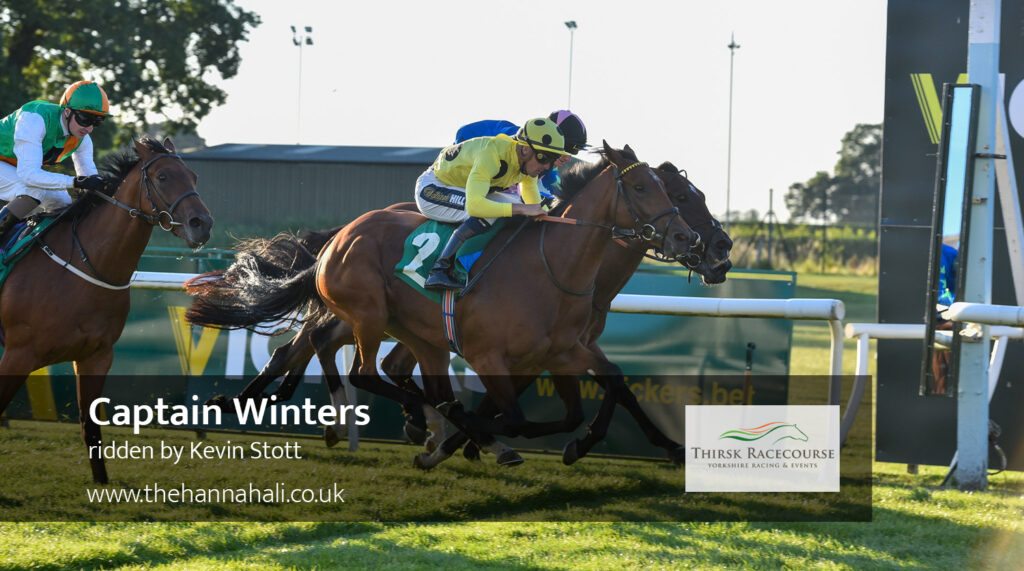 Reem Three has been a wonderful mare for owner Sheikh Mohammed Obaid Al Maktoum. Not only has she produced winners but the majority of her offspring have been mainstays in pattern company. Captain Winters followed his siblings by maintaining his dam’s winning stats when he got off the mark in the 7f Irish Stallion Farms EBF Novice Stakes at Thirsk.

Triple Time was one of last season’s stand out juveniles and 1/2 brother followed a very similar path to his first win. Captain Winters began his career over 6f, running respectably before then going on to be runner up when stepping up to 7f on his second start. Just like his brother, Captain Winters proved it was third time the charm but his win came over a furlong shorter.

Having run to a fair standard in his first two starts, Captain Winters would go off the 2/1 fav. Kevin Stott was in the saddle as the pair would take on 10 rivals at their local track. Chasing the leaders from the off, Captain Winters was settled around mid division as they quickly headed through the first furlong, taking the field into the bend. The sweeping bend saw the field through the first half of the race with the pace being a fair one. Captain Winters travelled smoothly just on the outer as they headed into the straight. Thirsk offers plenty of time to challenge so turning for home there was still over half the race left to run.

Angled out, Kevin had his mount in clear daylight passing the 3f marker as his colt moved up travelling well. The race heated up with the leaders trying to quicken and this saw Stott nudge his mount to get him lengthening. Just over 2f from home Captain Winters jinked to his left, subsequently bumping his rival but Kevin quickly adjusted the colt. Now he got into his drive to try and regain the momentum lost and the pair moved through to challenge for the lead.

Captain Winters shifted through the gears and was making good headway down the outer as he came through to vie for the lead.  Sticking his nose to the fore, Captain Winters took the advantage but whilst doing so he began to edge left. He lugged into his rival which again gave Stott some readjustment work to do and the pair had the lead heading inside the final furlong. Despite his experience, Captain Winters was rolling around under pressure, which Kevin continually had to counter. His market rival was proving very tough and wasn’t being helped by Captain Winters. The final m1/2 furlong was a battle to the line but the closer they got, the stronger Captain Winters was proving to be. Edging the lead in the final strides he dived for the line, taking the win by a hard earned head victory.

Having improved with each run, it was great to see Captain Winters get his head in front. There was a lengthy stewards enquiry and it was a 50/50 call. Despite this being his third run, it was clear that Captain Winters still has a little bit to learn and there could be more to come from the colt. He is bred to get better with time and racing so a step up in grade could now be on the agenda. His brother, Triple Time, won the listed Ascendant stakes at Haydock and Captain Winters could follow the same path moving forward.