As a new year begins the winners tally resets to zero and a clean slate is started. Everyone looks forward to the first winner which will get the ball rolling. This time of year is not the busiest for the yard in terms of runners but Captain Cooper was the one who managed to earn his first career win in the 7f Ladbrokes Where The Nation Plays Novice Stakes at Newcastle.

Captain Cooper hails from a family that Kevin knows well, with Dam Miss Delilah producing 3 quality individuals that have passed through Hambleton Lodge (Ashadian 106, Everything For You 93 and Lady Of The House 85). Bred by Highbank Stud, the Muharaar gelding was sent into training and it was clear that he would appreciate time. Patience did him the world of good as he filled out into his frame and matured nicely.

Having seen the turf season wrap up, Captain Cooper was set to make his debut a little later and would be introduced on the AW. His debut run at Newcastle was full of promise as Captain Cooper finished runner up to a smart looking rival. Not only was the result full of promise but the manner in which he had tackled the race, relaxing early before finishing well. Unfortunately that great debut performance could not be backed up next time out, again at Newcastle, as he performed well below par. Thankfully Captain Cooper was found to be under the weather, explaining the lacklustre display.

Captain Cooper was given a month until his next run, plenty of time to clear up any small illness and freshen him up. He looked great and was sent to Newcastle for the third time in his short career. Again racing over 7f but this time Tom Eaves would take over in the saddle. The race was seen to revolve around three contenders despite 8 runners set to line up. Malhoob was the well touted newcomer and the money poured in for him, making the Roger Varian colt a short price 4/6 fav. Captain Cooper was his nearest rival in the market at 4/1 which could be a big price if he retuned to his debut form. The only other rival who had any level of form was Abrag, who would be the third fav.

Utilising experience, Tom sent Captain Cooper to the lead immediately after leaving the stalls. This allowed the gelding to use himself and he strode out on the front end. Th favourite showed his inexperience, slowly away and settled at the rear of the filed. With daylight in front of them, Tom made a beeline for the stands side rail. Through the first furlong the field had moved all the way across as Captain Cooper was chased by Abrag.

Although the gallop was fair, Captain Cooper wasn’t pressured for the lead so he was able to dictate the fractions. With the field full of newcomers and weaker form, they were quite spaced out as they moved through the first few furlongs. The fav was giving a good headstart to Captain Cooper as the leader travelled well in front and was continuing to lengthen. By the halfway stage he held a 1 1/2 length lead and was just trying to stretch his rivals.

The field closed up on Captain Cooper as they reached the final 1/4 mile but Tom was not moving. Malhoob moved through down the centre of the track whilst Abrag came along the rail to lay down their challenge. The rest of the field were weakening out of it and the market looked like it had the race summed up perfectly. Whilst his rivals were under pressure, Captain Cooper continued to gallop on the bridle. The lead began to inch wider and wider with Captain Cooper beginning to turn the screw.

With plenty of horse underneath him, Tom still had a double handful as his lead increased to 3 lengths passing the 1f marker. Now he got lower in the saddle to just ask the gelding to quicken up and Captain Cooper did that. He stretched clear, lengthening all the time and increasing his lead. He turned the race into a procession, as Captain Cooper strode out to an emphatic 5 1/2 length win. 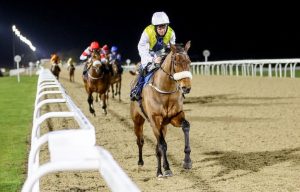 It was an impressive display from Captain Cooper who travelled powerfully and never gave his rivals a minutes rest. It was good to see him bounce back to form after a disappointing second run. There was an excuse for that performance and Captain Cooper has really stamped himself as a promising prospect with this win. The handicapper will asses the gelding now and that will determine where the 3yo heads to in the future. Whatever is in store there can be no doubt that Captain Cooper looks very exciting.