If Royal Ascot is the jewel in the crown for British racing, then the same can be said for York’s Ebor meeting and the north. The Kanesmire’s flag ship meeting offers world class racing with a Yorkshire welcome, which creates a week of great racing and great fun. Every Yorkshire trainer loves to have winner at York and it was great to get off the mark for the week on the first day. Cairn Island made it two on the bounce when he took the 6f Sky Bet Nursery Handicap.

The son of Kodiac is a striking colt who’s physical presence had caught Kevin’s eye at the Tattersalls Book 1 sale. His work matched the physique and Cairn Island looked like a very promising 2yo before making his debut. Starting over 7f, Cairn Island showed promise when travelling powerfully before weakening late on. That run convinced Kevin to drop him to 6f for his second run and once again the colt travelled well into the contest. Thinking that the 7f had stretched his stamina, it was disappointing to see Cairn Island weaken in the final furlong again.

Although both runs had shown promise, Cairn Island had been slightly underwhelming in his first couple of runs. After some deliberation and replays of the races it was determined that inexperience may well have been the cause of these two results. Kevin sent the colt to Ayr for his third run and his decision was justified with a first career win. Cairn Island was to the forefront throughout before powering clear and showing that he had learnt from his experiences. With three runs under his belt Cairn Island was due to get a handicap mark and the opening 80 seemed quite fair after his convincing win.

Cairn Island certainly looked like he was improving with each run and mentally he was learning what was needed of him. Kevin decided to utilise his opening mark and immediately nominated York as the colt’s next run. All 2yo races at York are ultra competitive and you need the right type to have a chance of running well there. Only 12 were declared for the nursery but it looked like a very tricky contest. Although there were only a few winners in the line up, many of the runners looked to be on very fair handicap marks and anyone of the 12 runners could be open to any amount of improvement. Andrea Atzeni was up at York for the week’s racing and took the ride.

Sent off as the 9/2 second fav, Cairn Island was one of the leading fancies but would need to step up again from his last run. There had been plenty of wet weather around and the ground was officially good to soft. Having raced on similar ground before, this would hold no fear for Cairn Island. The stalls were positioned in the centre of the track as the 12 runners were sent on their way. Cairn Island jumped well and was quickly into his stride from stall 4. Likewise a few of his rivals were also sharp and pushed forward in the early going. There was a mad dash for the lead as the field began to converge down the centre of the track. Andrea was keen to go forward but once they had gone through the first furlong he settled just on the leader’s girths. Charging down the Knavesmire, the 2yo’s were well bunched up with very little separating first to last.

There was no holding back through the first half of the race and the pace was strong throughout. Toussarok took over the lead heading down towards the 3f marker just next to Cairn Island. Despite seeing his rival move forward, Cairn Island maintained his position and travelled well for Atzeni. The field just edged a little closer towards the stands side as the leader was positioned closer to that rail. With the strong pace there would be no hiding place and passing the 3f marker, already one or two were feeling the pinch. Cairn Island moved through stylishly as the race started to heat up.

Moving into the final 1/4 mile the race completely changed complexion. Andrea had not moved a muscle as Cairn Island took the lead travelling smoothly. The 12 runners began to split up and get stretched owing to the strong gallop the leaders had set. Toussarok relinquished his lead tamely and now Cairn Island was the one they all had to catch. Perotto was another who loomed up dangerously on the far side, as well as a couple of held up runners beginning to make inroads. Andrea gave his mount a squeeze and although Cairn Island responded his rival Perotto proved stronger. His lead had only lasted 50 yards but he was not out of the contest and stuck his head down. Losing about a length to the leader Andrea now got into his full drive and Cairn Island gathered himself together and quickened up.

As Perotto took them into the final furlong the race was well and truly split up. Cairn Island was now starting to get into full swing and had 3/4 length to make up on the leader. The pair were edging away from the rest and it looked between the two, although it was advantage Perotto at this point. For every inch that Cairn Island nicked, the leader matched him and the two were clearly brave individuals. As they began to battle it out they took each other along, pulling further clear of the rest. Seeing the two with their heads to floor was a true reflection of genuine horses and it was going to be a tough battle for the final 150 yards. Tit for tat, the pair matched each other blow for blow. Cairn Island was slowly getting closer and cut the lead to 1/2 length with 100 yards to run. Andrea changed his hands looking to one more gear from Cairn Island. Both Cairn Island and Perotto were on the limit but Andrea managed to conjure a little bit more. As the finishing line loomed up, Cairn Island dug deep into his reserves and had one final crack at his rival. This move saw him pull alongside the leader and this time Perotto couldn’t quite match. Now the momentum swung into Cairn Island’s favour and the colt was not going to stop. Grabbing the lead with 75 yards to run, Andrea drove out Cairn Island and the pair managed to extend their advantage. Crossing the line Cairn Island had battled out to a 1/2 length winning margin. 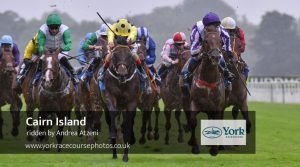 Although there can only be one winner but both the winner and runner up deserve huge credit. Cairn Island travelled smoothly into the contest and then showed a great attitude to battle bravely for the win. He is not short of speed but Cairn Island also sees out every yard of the trip and has ticked a lot of boxes in his performances so far. He is an improvement colt and now he looks to have matured mentally to match his physical presence. The style in which he won this would suggest that the 6 1/2f Wetherby’s 2yo Race at Doncaster could be ideal for Cairn Island. It is great to have a winner for Sheikh Mohammed Obaid Al Maktoum at the Ebor festival and Cairn Island looks like a very promising colt moving forward who should only get better with racing.