Kodiac has provided Kevin with one of his best sprinters in the shape of Hello Youmzain but he wasn’t typical of the sire. Usually precocious sorts, Youmzain was strong but had scope too. The same could be said of Cairn Island and when Kevin saw him at Tattersalls he was immediately taken by the colt. It has taken a few runs to get his head in front but Cairn Island couldn’t have been more impressive when running away with the 6f British Stallion Studs EBF Novice Stakes at Ayr.

Not only is Cairn Island a lovely physical but he has a beautiful pedigree to match. There is quite a bit of stamina in the family and this led Kevin to starting him over 7f. Cairn Island showed up for a long way on debut before just weakening in the final furlong. The obvious step was to try a drop to 6f and use the colt’s speed for his next start. Again running at Haydock, Cairn Island showed up well once more to lead the contest. Unfortunately he weakened again late on which was a little disappointing.

Kevin felt that the racing experience would certainly stand the colt in good stead and hopefully that experience could see him improve going forward. Ayr was the destination for his next start and Cairn Island would be set the task of taking on 6 rivals in the Novice Stakes. There was only one rival who had experience like Cairn Island and that filly had run in a listed event recently. Although he hadn’t managed to fully do himself justice previously, Cairn Island was to be sent off 9/4f with punters thinking it was third time lucky.

Kevin Stott is enjoying a great season and really is breaking out this year to show his talent on a far wider scale. He was booked for the ride and like so often this year he rode with supreme confidence. Cairn Island had shown good speed on both his starts and jumping well Kevin let him get straight into stride and go forward. With the stalls placed towards the stands side rail he quickly tracked over to join the early pace setter. All the field joined in and the 7 runners raced up the rail as they kicked on through the first 2f.

The newcomer Love of Zoffany was showing to be very professional and Stott decided not to force the issue. Cairn Island was down by 3/4 length but travelled well moving towards halfway. The market rivals were all in behind the colt and were not running quite as smoothly as the favourite. It was a fair gallop and they passed halfway in in a decent time. Stott was riding with soft hands and allowed Cairn Island to stride out which he was happy to do. After being a little unbalanced, Miss Nay Never moved up menacingly to join Cairn Island.

Hitting the 2f marker and the leader came under pressure, quickly relenting and dropping away along the rail. This left Cairn Island in front with Miss Nay Never alongside and probably travelling the better on face value. Kevin began to niggle away but his colt didn’t respond immediately. Still holding a narrow advantage, Cairn Island started to lengthen and this caused Miss Nay Never to come under a drive. Stott decided that he needed to pose Cairn Island a proper question and gave him a couple of flicks to show him he needed to produce more. The colt quickly understood and quickened up, pulling away by a length with 1 1/2f to run. Suddenly Cairn Island was out in front with the outsider Kats Bob the only one able to go with him. That only lasted for a couple of strides because Cairn Island soon began to dominate, lengthening and drawing away.

Heading into the final furlong Cairn Island had opened up to a few lengths lead and continued to pour it on. Kevin was not going to let him rest on his laurels and made sure he finished his race. The race was over but Stott wanted to educate his mount for future events and maintained his drive. He was showing Cairn Island what would be needed in future and the colt delivered for him, continuing to lengthen. Kevin eased up with 5o yards to run and allowed the colt to slow down as the pair earned a winning margin of 3 3/4 lengths. 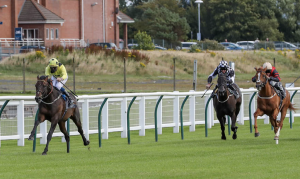 Cairn Island has shown plenty at home so his first couple of runs were put down to lack of experience. He really showed his true colours at Ayr and won in dominant fashion. After travelling well he galloped all the way to the line which still suggests that his trip could be versatile. Kevin will be in no rush with the colt and no plans are in place for him yet. There are plenty of options but it all depends on what is right for Cairn Island.