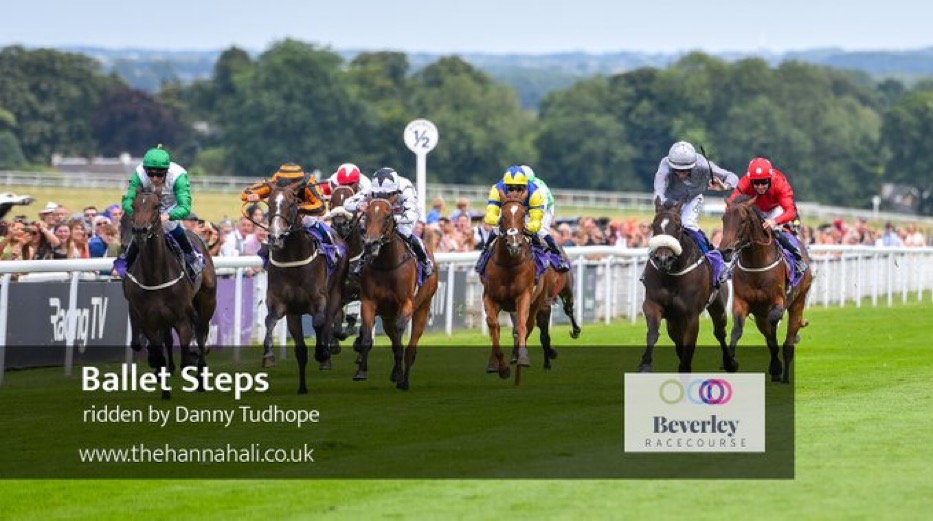 One of the season’s highlights has been the form of the 2yr olds. With around half of the yard in the juvenile category it was always going to be important that they could tally up the wins. Ballet Steps took the season’s total to 18 individual 2yr old winners, the second highest number in Britain when she made a winning debut at Beverley in the 5f Pure Broadband EBF Restricted Maiden Stakes.

The daughter of Dabirism is the first progeny of Savannah’s Dream and is a home bred from owner Steve Parkin, Clipper Logistics. She was a little later to arrive at Hambleton Lodge but having been in pre training it was clear that she would ‘t take too long to come to hand. Having shown plenty of speed at home Kevin decided to start the filly off at the minimum trip.

Declared alongside 10 rivals, Ballet Steps was well supported for her first run and was sent off the 5/4 fav. This was partly due to the strength of form in the race and also the attractive pedigree of Ballet Steps. Danny Tudhope was on board for his retained owner.

Drawn 3 was a nice pitch to come from but when she was a little slowly away that good position was given away. Danny gave the filly time to find her feet and with a strong gallop set, Ballet Steps found herself at the rear of the field. Strong pace up front saw the field blitz through the first half of the race, swing round the right handed bend and downhill.

When they straightened up for home, with just over 2f from home, Ballet Steps saw a wall of horses in front of her. Danny is not one to panic and he remained patient at the rear, keeping the filly balanced and travelling nicely. The race heated up passing the 2f marker and as her rivals threw down their challenges, Ballet Steps still had over 5/6 lengths to make up. Danny was angling for a gap but on a couple of attempts he found his route blocked. As the leaders moved clear there was a small break to some weakening rivals which opened a door to Ballet Steps. Switching towards the outer, Danny now gathered his reins and asked the filly to go and pick up.

Still having ground to make up, Ballet Steps was starting to make her challenge down the middle of the track as the ground raised up for the final furlong. Danny was cajoling his filly and gently getting her to lengthen. Slowly but surely she was picking up but it did seem as though she may not be doing it quite quickly enough. Deep inside the final furlong and with the winning line in view, Ballet Steps was starting to hit top gear but it was baby steps. Now Bollin May had taken control and held the lead, along with the rail to help. Suddenly Ballet Steps found her stride and despite there being just over 75 yards to go she started to fly. Within strides she had overtaken a handful of rivals to grab second and it was in the dying yards of the line that she threw down the final challenge. Momentum had swung in her favour and Ballet Steps flashed past the line alongside Bollin May with the width of the track splitting the pair. At full speed it was a close call but once the replay came up it was a clear neck win for Ballet Steps. 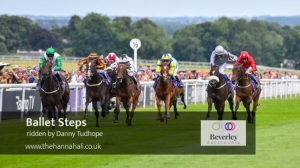 Everything that could have gone wrong for Ballet Steps did from the off and she did very well to overcome the adversity. She showed plenty of greeness early on but Danny gave her a fantastic ride, educating Ballet Steps all the while. It did take a bit of time to fins her feet but once the penny dropped, Ballet Steps quickened up smartly and finished powerfully. The manner in which she finished her race off signals talent but it looks as though she would get further in time and could be as effective over 6f. Ballet Steps will have learnt a lot from the experience and will come on for it so wherever she goes next she is an exciting filly for the future.