You Are Here: Home > Latest News > Ball Keeps Rolling With Another Brace

Ball Keeps Rolling With Another Brace

Strike while the iron is hot and that is certainly the case at the minute. Since racing’s resumption the form of Kevin’s horses has been top notch and the winners continue to flow. This time around it was the turn of two maidens who were gaining a long over due success. Ventura Rascal and Stars In The Night shed their maiden tag at Catterick to give the team another double.

Whilst seeing the horses run well, hitting the crossbar can be very frustrating. It’s not just because they haven’t managed to win but sometimes the horses hasn’t got their just desserts and can then be punished but the handicapper. Ventura Rascal had been knocking on the door but this time around he burst through to take his first career win in the 7f Sky Bet Thank You Key Workers Handicap.

Last year was quite a strange one with Ventura Rascal as he looked likely to be an early 2yo. That was looking to be true as his work shaped like he was ready early in the season but then a growth spurt led to a stop start year. Obviously he was telling connections that he wasn’t ready and Middleham Park Racing proved to be very patient with him. The belated debut would come all the way in December on the all-weather. It was nice to get him out on the track and two runs on the Tapeta showed that there was certainly ability but a slightly sterner test of stamina would be needed rather than the 6f he had run over.

The only advantage of the disruption caused by lockdown was that 2 runs could qualify horses for a handicap mark. Ventura Rascal received 66 and this opened up plenty of options moving forward. It quickly became clear that it was a mark that he could win off and after a decent 5th over the extended 7 1/2f he improved with each run. The third a Doncaster was better than the bare result as he ducked towards horse boxes 2f from home. Then he was agonisingly headed on the line at Ayr to finish a narrow runner up.

Somehow Ventura Rascal had been given a little leeway and his mark dropped to 63 so the race at Catterick over 7f and for horses rated 0-65 looked perfect. It was a competitive little event with 14 declared for the contest and it would be the first time that Rascal would take on his elder counterparts. Tom Eaves had ridden Ventura Rascal for the majority of his career and was once again booked for the ride.

Catterick lends itself to frantically run races and this would be no different. Drawn towards the outer, Ventura Rascal would need to be quickly away to try and gain a pitch. He was smartly into stride and this allowed Tom to let him go forward and track over to get closer to the rail before they hit the sharp left hander. Ventura Rascal had managed to get up to speed and got a lovely position in second chasing the leader Bumbledom who set strong fractions.

They blasted down the hill which would would then steadily rise back up before they entered the bend. The field were well spread out as they began to turn left handed. The leader was not hanging about and continued to turn the screw from the front. Ventura Rascal held on to his position entering the bend but then lost it as the angle got sharper. With a rival sneaking up the inside and forcing him further out wide, Ventura Rascal lost his foothold and got shuffled back. Tom just had to nudge him along to try and keep tabs on those in front but they were soon exiting into the home straight.

Bumbledom had not seen a rival and kicked straight off the bend, moving inside the 2f. Tom had been pushed wide but that was fine entering the straight as Ventura Rascal had clear daylight in front of him. The leader was still holding sway but was under strong pressure from all sides. Ventura Rascal was trying to pick up but initially he couldn’t quite cut into the deficit. Tom kept working away and as they closed in on the final furlong he bagn to get the response he was after.

The leader was proving very tough out in front and had repelled all comers. He was still fighting a challenge on the far side rail but would start to get on top passing the 1f marker. Ventura Rascal had moved through to 3rd position and started to hit top gear with 150 yards to run. Bumbledom had led from the off but would have one last challenger. The pair had seen each other at the start and the same battle would happen at the finish. slowly but surely Ventura Rascal was closing the gap but he had a tough adversary to get past. The lead was cut and with 50 yards to run the leader had to final succumb. Ventura Rascal got his nose into the lead and finished off well to stretch his advantage to 1/2 length as the pair flashed past the post. 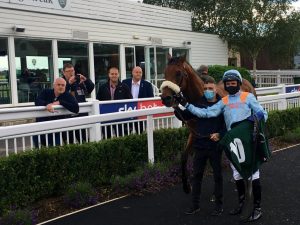 Ventura Rascal had been threatening and coming ever closer so he fully deserved this win. Once he lost his position coming round the bend the task at hand did become more difficult but Ventura Rascal responded well when asked by Tom down the home straight. It did take a little bit of time for him to hit top gear but he had a tough rival to get past. It may be that a more conventional track would suit or even a sharp mile. Middleham Park have been very patient so it was great to get a winner on the board for them and Ventura Rascal can go on from this, hopefully adding to his tally now.

Somehow Stars In The Night was still a maiden heading to Catterick. The filly had always been well thought of and if you had said last year that she wouldn’t have won a race in her first 7 starts then you may have had a few funny looks. Thankfully she gained the well deserved victory when she took the 5f New Sporting Life App Maiden Stakes.

Last season there was some nice form from Stars In The Night but with some testing ground and probably immaturity she couldn’t quite get her head in front. The winter looked as though it had been good to Stars as she came back a lot stronger. That certainly looked to be the case when she returned to action this year finishing a very good runner up, conceding race fitness to her rival. Unfortunately she couldn’t capitalise next time out in a maiden where again she was the bridesmaid.

There were options moving forward and connections decided to once again go for the maiden route. Once the declarations came out it did seem like a very good opportunity for the filly as she was top rated and those with a run needed to step up. Kevin Stott was booked for the ride and he went out to  ride her with utmost confidence.

Drawn 3, Stars In The Night was quickly away and immediately into stride. The jockeys were not very keen to go near the rail and so Kevin edged away to the middle of the track to join the leader Summit Fever and market rival Northern Charm. It was frenetic pace and the field blasted through the first half of the race without incident.

Simplicity was the order of the day and Kevin just let his filly bowl along. As the round track enters the straight it brought the horses into the second half of the trace. Stars In The Night  was travelling easily at speed and closed up on the leaders. Having travelled on the girths she now joined Summit Fever going much better. The second favourite was towards the near side but moving into the final 2f Stars In The Night looked to have the measure of them. They had gone hard so the finish would be a test.

Kevin asked his filly to put the race to bed 1 1/2f from home and she picked up to kick clear but a length. This was a race winning move and as soon as she quickened up the race was over. Nothing could really match the favourite so it was a case of keeping her up to her work. Kevin made sure she galloped all the way to the line and maintained his full drive. Stars In The Night didn’t stop despite having no company and Kevin made sure she knew the job was not done until they crossed the line. The final furlong was a little bit of a victory lap and it was just a case of how far would the winning margin be. Hitting the line Stars In The Night had won by comfortable 2 3/4 lengths. 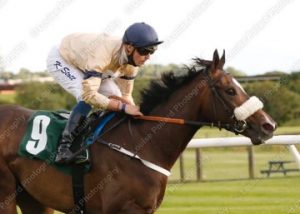 This was far from a penalty kick but Stars In The Night had to be winning to really move on for the rest of the season. She showed good speed and put the race to bed with ease. Kevin did the right thing as it will hold her in good stead for bigger targets going forward. It is great for all involved in Hambleton Racing and hopefully Stars In The Night can add to this.