You Are Here: Home > Latest News > Away And Gone As Roulston Scar Dominates

Away And Gone As Roulston Scar Dominates

Sometimes there is a race that comes along which may just have a little added meaning. David Barker was a very good friend of Kevin’s and sadly passed away. He trained some cracking sprinters and one of those was Mr Wolf who really became a Pontefract specialist. Due to his exploits they have named a competitive 3yo sprint after him and this year Roulston Scar ran away with the 6f Mr Wolf Handicap.

Last year was full of promise for Roulston Scar and so far this season has been about him building and fulfilling that promise. Although a maiden he had some good form in the book so his return was something to look forward to. He had raced over 5f and 6f so there were plenty of options for him heading into this season. Kevin plumped for a 5 1/2f handicap at Wetherby for Scar’s first run, a race he had won with Elnadim Star in 2018. Roulston Scar made no mistake in getting off the mark impressively, leading from start to finish and powering clear to break his maiden.

The form of his win was franked with the 3rd placed horse winning next time up. Kevin decided to go to York with Scar for a competitive 5f handicap at the Dante meeting. It was another bold show, with Roulston Scar finishing 3rd, finding the 5f on quick ground just too sharp. With two solid runs under the belt it was clear that there was plenty of improvement left in the tank.

With lots of options moving forward Kevin plumped for the Mr Wolf handicap at Pontefract, stepping up to 6f for the first time this season. Tom Eaves had enjoyed victory on the 3yo and was back on board for the contest. Rain had fallen for a few days so the ground was soft as 9 runners were declared to go to post.

Drawn in stall 3 Roulston Scar got a good start, jumping quickly and into stride. There was an early push for the lead from a few of the runners but Roulston proved too quick and shuffled over to the rail to take control. Running over the undulations the pace was fairly strong as the field settled down in behind the gelding. With his mount in full flow, Tom allowed him to go on as his rivals now were happy to take the lead. Racing through the first couple of furlongs the trip took them down towards the bend with Roulston taking the field along.

As they moved towards the bend it looked as though the pace was generous with those towards the rear of the field being niggled along. Roulston was happily setting the fractions in front and opened up a clear 1 1/2 length advantage. Swinging left handed and they entered the second half of the race with Roulston travelling well on the front. As he led them a merry dance his rivals were one by one coming off the bridle. The field were beginning to race well over 2 1/2f from home, trying to contain the leader. Roulston Scar just continued to pour it on from the front and with him travelling so well, Tom was happy to let him get on with things. By the time they hit the 2f marker Roulston had a clear advantage.

Swinging off the bend and now inside the final 2f Tom began to wind up his mount, pumping him along through the gears. The rest were now hard at it and nothing had managed to get close to the leader yet. Tom opted to stay away form the far side rail and allowed Roulston to drift into the middle of the track, looking to find the better ground. They were still going well and with a clear lead it was a matter of when Tom would ask for his final kick. Despite going well there was the final furlong to contend with, an uphill finish that would test any stamina reserves.

Staring down on the 1f marker Tom afforded himself a quick look over the shoulder. What he saw was pleasing and now he asked Roulston to kick on and win his race. The gelding continued to power forward and despite not seeing a rival he kept up to the task. Triple Distilled had been the one to give chase for much of the straight and although he was pulling away from the rest he couldn’t match the leader. Roulston Scar maintained his run and his lead, staying on up the hill and winning by a comfortable 2 lengths. 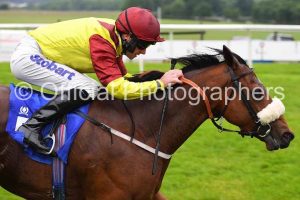 This performance was impressive from start to finish. Roulston took control of the race and never looked back. Despite setting a good pace he kicked in the straight and managed to see out every yard of the trip, being as strong at the finish as he was from the get go. He is on an upward curve and looks a nice 3yo for the season ahead. This will warrant another rise form the handicapper and whatever he does will decide where the gelding goes next.