Another Double Added To The Tally 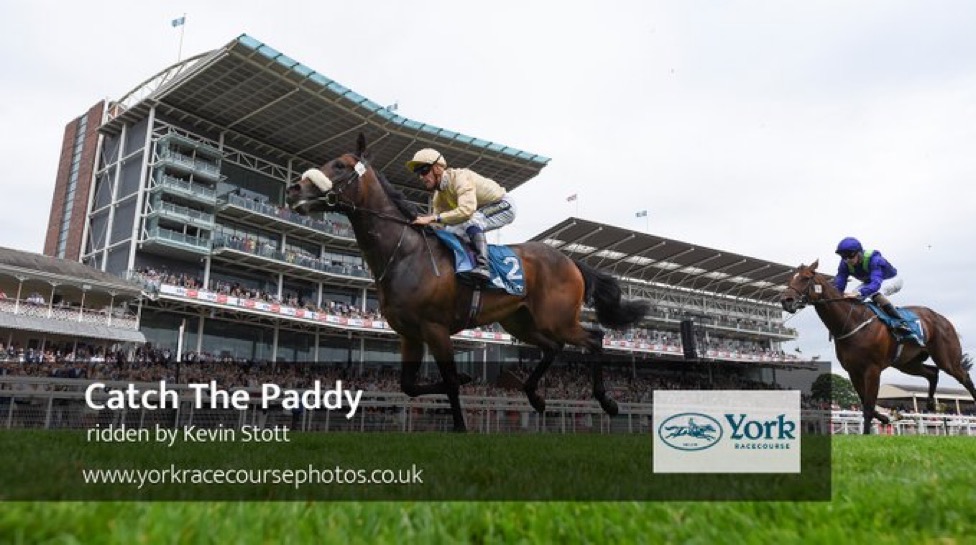 The horses are in fine form at present and the winners are flowing. Saturday provided some fantastic racing throughout Britain and it is always the hardest day to get on to the scoresheet. Thankfully Catch The Paddy and Cotai West provided the team with a nice double.

Catch The Paddy may be a work in progress but he has made a bright start to his racing career. The son of No Nay Never has not only proved quality on the track but a legend to deal with. Strong and laid back, Catch The Paddy took another impressive step forward in his career when winning the 6f Sky bet In Running Nursery Handicap at York.

Having made his debut over C&D, when catching the eye finishing runner up, Catch The Paddy has done nothing but improve. Filling the same berth second time out, he made no mistake when on the third try at Hamilton. With his two conquerors both going on to be placed at Gr2 level, it was interesting to see what the handicapper might do. An opening mark of 82 seemed fair and so Catch The Paddy was aimed at York for his nursery bow.

It was a small field of 6 that would line up and looking through you could possibly say most could be improving off their mark. Catch The Paddy looked potentially the one who could be well in and the punters would send him off the 5/4 fav. Kevin Stott has already bonded well with the colt and took the leg up on him once more.

The pace came from the one contender yet to ever try 6f. It was a good gallop set and this allowed Kevin just take on to the pace and settle in behind the leaders. The field raced towards the far side of the track as they flew through the early stages.

Due to the small field and strong pace, the race would heat up a long way from home. By halfway they began to spread out as the jockeys manoeuvred into their challenging positions. Catch The Paddy was moving sweetly and pulled his way closer to the front. As the leaders started to come under pressure, Catch The Paddy moved up and was challenging for the lead. Kevin hadn’t moved a muscle but his mount had taken him all the way there. His nearest market rival immediately looked to cover the move and switched out from behind Paddy.

Passing the 2f marker and now Kevin pressed the button. Lengthening, Paddy moved clear and pulled Dare to Hope along with him. The leading pair quickly moved away from the rest and looked to have it between them. Catch The Paddy was not into top gear yet and was under pressure from his rival. Lengthening all the time, Paddy started to edge ahead as they moved into the final furlong. Now he had momentum and was starting to hit top gear. Holding 1/2 length advantage, Catch The Paddy could now power on, pulling further away the further they went. His last 1/2f was his best and by the line he had kicked clear by 2 lengths, with the rest well spread out.

Catch The Paddy is a lovely prospect and has done nothing wrong so far. He bumped into a couple of smart juveniles themselves and he looks like a really nice colt in the making. Far from the end product, Catch The Paddy will be better with racing and you may not see the best of him until next year. He does hold an entry in the Gimcrack Stakes back at the Ebor meeting. Catch The Paddy has certainly shown he deserves a crack at a race like that but if it comes too soon there is also the big nursery at the same meeting.

Unlucky is a hard word to use in racing sometimes because you never know what might have happened if it did all go right. Cotai West looked like she was full of running when no gaps opened up for her last time and could be seen as an unlucky loser. Whether or not that would have happened, nobody knows but she made no mistake when winning the 5f Brain Tumour Charity Handicap at Newmarket.

Having made one start as a juvenile last year, Cotai West proved to be ultra consistent in novice/maiden company. Having finished placed on her first four starts, Cotai West broke her duck on the fourth attempt. She earned a fair mark of 71 when stepping into handicaps for the first time. At Beverley she got no run at all, locked up behind horses for 4 1/2f of the 5f contest. It did seem as though she was unlucky so connections were hopeful she could put that right before long.

Shane Gray travelled down for the ride as 6 runners would line up. In the race was a filly who had finished only a neck ahead of her last time out but who had since won. This meant that Cotai West had a 9lb pull from last time, which felt like a big plus for her.

The pace was strong from the off as the field converged together and aimed for the centre of the track. Shane looked to get his filly settled early on and she tucked just off the leader. They blasted through the first half of the race as the favourite led the field a merry dance. Cotai West has certainly matured through racing and travelled smoothly for Shane.

They got racing by halfway as the strong gallop forced them to challenge the leader. With the small field, there was plenty of daylight for Shane to aim for and he rousted his filly along moving into the final couple of furlongs. They were 3-4 spread across the track and all looking like they had chances as the field hit the rising ground. The leader was proving very game and very hard to pass as they repelled the challenges.

Passing the 1f marker and Cotai West had just about pulled alongside the leader. Her known rival Vaunted was also making late headway and it would be a thrilling finish. They went at it hammer and tongs, with a late flourish looking to join in. Cotai West hit the front with 100 yards to go but couldn’t quite pull clear. She was viewable to one last surge but the filly had enough left in the tank, holding on to a neck advantage.

After the misfortune last time out it was nice to gain a bit of redemption here. Cotai West has done nothing wrong since her debut and looks to have a bit more to give. It did look as though she was only going enough in front, so could have been keeping a little to herself. Cotai West can travel well and pick up so she may be better suited to a higher grade or bigger field and she certainly looks likely to be winning again soon.