Anadora Toughs It Out For Old Allies 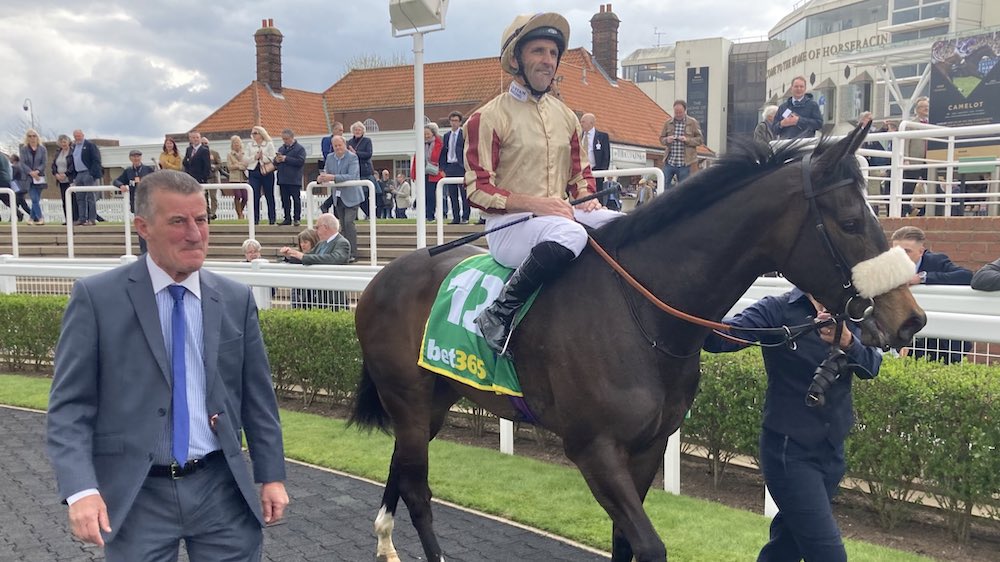 Winning debutante and then stepped up in class, it is not something that Kevin takes lightly. Sometimes it doesn’t work out but it is a move that Kevin does not take lightly and will only do so if he feels they are good enough. Anadora was the yard’s first 2yr old winner last season and she won again but this time on her seasonal debut when battling for the 6f bet365 Handicap at Newmarket.

Royal Ascot, York, Goodwood, Anadora went to all the big meetings last year. Her record of just the one win may have looked a shade disappointing from the outside but she ran with credit in some huge races. Towards the end of the season there was a suspicion that maybe she had grown. Anadora had proven to be an early juvenile and did maintain her form through the season but just wasn’t quite finishing her races of as before. There was a suspicion that she may well have a bit of strengthening up to do and as a 3yr old she could be better.

Over the winter the filly really filled out and her homework proved that she certainly had matured. Trip wise Anadora had shaped as though 6f would suit but last year it seemed as though she could never quite see it out. Coming back a different model all together, confidence was far higher now and Kevin targeted the 3yr old handicap at Newmarket’s Craven meeting.

Old ally Neil Callan was booked for the ride and if there is one place where he has proven lethal in the past, it is at racing’s HQ. Sent off the outsider at 25/1 showed the competitiveness of the race but Anadora was quickly out from the gates. Allowed to hit her stride she moved forward and soon pressed the leaders who were setting a good early gallop. As the race settled down the field raced up the centre of the track but were quite spread out.

Anadora was always covering the leader throughout the first half of the race which kept the tempo quite high. Passing halfway the race began to unfold, a long way from home when you have the uphill finish to contend with. Callan began to wind the filly up as they galloped into the famous dip, gaining momentum for when they hit the rising ground. Anadora edged her nose to the lead passing the bushes but did just move left as Neil became a little more animated in the saddle.

The strong gallop had sorted the field out quite quickly with those forcing the issue fading. Anadora held a narrow lead and was the only one still fighting it out but she did look as though she was a bit of a sitting duck. Hitting the bottom of the dip they raced into the final furlong and Anadora lost her lead. She quickly changed legs and Neil now asked for everything. Well the lead change lasted a matter of strides with Anadora quickening up and forcing her way to the front again.

Spread across the track, there was a three way tussle deep inside the final furlong. Anadora had laid down her marker and held the advantage, something she was not willing to give up. Along the rail she could see her nearest challenger but over the other side of the track she had to wary of a fast finisher. Neil asked for everything and he got that in spades with Anadora, head to ground, eating up the turf and battling away. The 6f was no issue now and she gamely hit the line well, securing a second career win by 1/2 length.

Off a mark of 85, Anadora was once again winning on her first start of the season and this may well be something that Kevin keeps in mind. There is potential that the filly may appreciate a little bit of time in between races so a pre planned programme will be in order. Obviously the handicapper will have his say about this too and whatever he decides with her handicap mark may steer her in a certain way. Kevin always like the filly and there will be some hope for connections that she may well pick up black type. With an attitude like this Anadora can only go from strength to strength and really fulfil her potential.