Alia Choices Flies On The Knavesmire 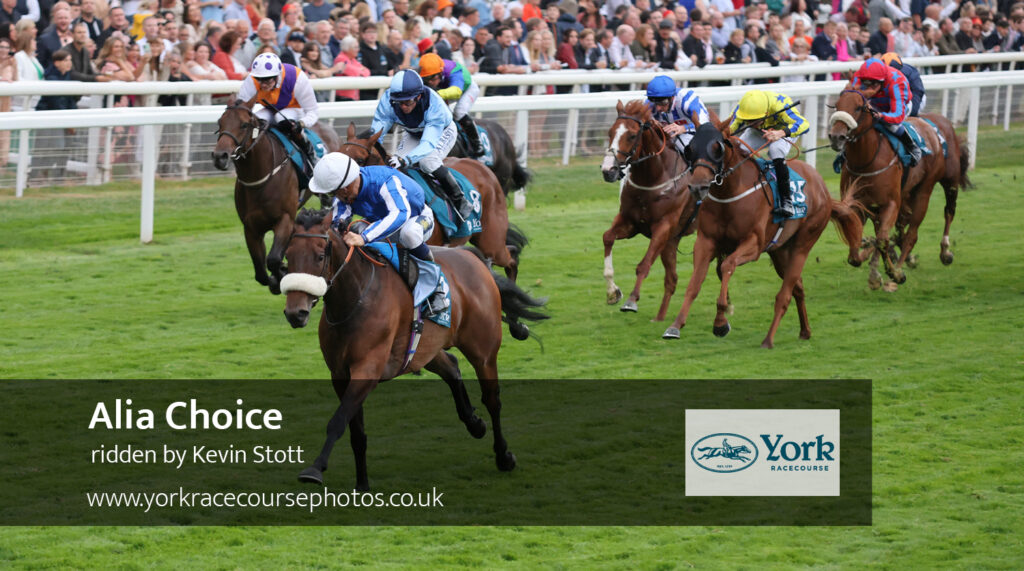 Queen Kindly’s career highlight came at York when she took the Lowther stakes. It may not be on the same level but her daughter, Alia Choice put in a career best at the same venue. Having had a few differing trips and tracks, it looked as though the Knavesmire provided the perfect solution as Alia Choice bolted up in the 5 1/2f Sky Bet Go-Racing-In-Yorkshire Summer Festival Handicap.

Although bred to be sharp, Alia Choice didn’t make the track until late last year. She certainly made up for lost time when she improved on a debut fourth to then win at the second attempt at Chelmsford. Returning to the same venue for her third start, Alia Choice managed to finish runner up and secure an opening mark of 80.

Since stepping into handicap company, it has been quite tricky to figure out just what trip Alia Choice wants. Trying 6f and 5f, she had put some good efforts up but not really progressing like she had threatened to do. Staying on late over 5f but then looking like she didn’t get home over 6f, the next run would be key to the filly. There could not have been a better race coming up than the 5 1/2f trip at York. It looked tailor-made for Alia Choice as she lined up against 14 others.

Kevin Stott had only missed the ride on Alia Choice once, unfortunately when she won. As she left the stalls the early pace, which was expected, was frantic leaving her settled in mid division. Through the first furlong the leader had the field stretched out showing blistering pace. As they separated out the field chased the leader down the centre of the track and there was a good 8-9 lengths from first to last.

Blink and you miss it as they charged past halfway. Already there were some of the field coming under a drive. The leader was not for stopping and looked to kick off the front end. Kevin gave Alia Choice a little squeeze to get closer and she edged around rivals to inch closer. Having latched onto the tails of the leaders, Kevin just had to manoeuvre to get a clear run. Passing the 2f pole Alia Choice came back onto the bridle and moved out from behind the leaders to challenge.

Alia Choice was absolutely cantering as her rivals struggled to match her move. Kevin held his filly together until 1 1/2f out and when he loosened his grip she took off. Easily opening up a length lead, Alia Choice now went for home with just a furlong to run. Initially there was one rival to come and give chase and whilst it looked like a big danger, it was immediately quashed. Changing her legs, Alia Choice went again and scooted clear. The final 1/2f was a victory lap as she put more and more distance between herself and the rest. Alia Choice bolted up by 3 3/4 lengths and could easily have been more.

Before the race it did feel as though 5 1/2f could be perfect for Alia Choice and it certainly looked true here. Throughout the race there was very little worry as the 3yo filly cruised into contention and then quickened up when asked. The way she put distance between herself and rivals was a sign of a talented filly and it looks like she could now be really coming to herself. She always looked a nice filly and with every race she is hitting her potential. The handicapper will be looking to stop her now so it will be interesting to see what plans lie ahead. Hopefully this beautifully bred filly could pick up some black type in time.