Aleezdancer Waltzes To An Easy Success 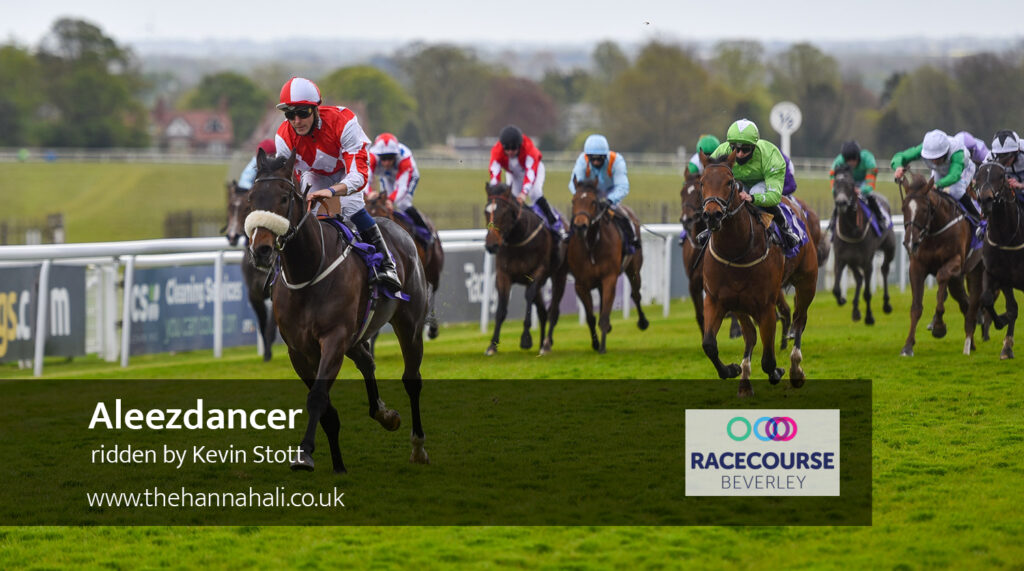 Promise and a nice introduction is the perfect start for 2yr olds and that can be from winning on debut to finishing unplaced. It is important for the juveniles to have an enjoyable first day out and something they can build on. Aleezdancer did just that as he stepped up on his debut fourth to run away with 5f Racing TV Novice Stakes at Beverley.

The son of Fast Company was gelded before his first ever run, something just to help settle him down. It was something that worked very well for him and Aleezdancer relaxed into his work and therefore came to hand early enough. Kevin always felt that the geld would get further than the bare 5f but he was ready to run and had to make his debut. Opting for Beverley due to it’s stiffer test, Aleezdancer ran green early on before the penny dropping in the final furlong. Finishing powerfully, Aleezdancer ran on to finish fourth and catch many people’s eye.

Having felt that the gelding may want further, Kevin had given him a chance at Beverley and would return to the Yorkshire track just 3 weeks later. Aleezdancer headed back with experience under the belt but would be faced with differing conditions. Recent weather turned the ground soft and Aleezdancer was lumbered with the widest draw of all the 12 runners. Conditions should suit but the draw was not kind and Kevin Stott, taking the ride, would need to earn his riding fee from the off.

Jumping slightly left from the stalls wasn’t the ideal start but Kevin quickly adjusted his bearings and tracked over with the rest. Aleezdancer used his experience as he quickly made up for the tardy start and was into his stride to chase the early leaders, sat just in behind them. There looked to be a good pace through the first couple of furlongs but Aleezdancer was actually just fighting for his head, looking like he wanted to stride on. He did relax and listened to Kevin, racing on the outside of the field.

The field charged through the first half of the race but were quickly racing for home. The pressure was telling as they entered the home straight and the majority of the field got racing a long way out. Aleezdancer was travelling sweetly down towards the centre of the track and Kevin was motionless on the gelding. Moving inside the final 2f if the race was frozen there looked to be only one winner. Whilst his rivals were struggling away, Aleezdancer powered through the ground and came through to challenge with ease.

Kevin waited and waited and waited. With Aleezdancer cantering into the lead it wasn’t until the ground started to rise, around 1 1/2f from home, that Kevin asked his mount to go. Lengthening and quickening up, Aleezdancer moved away from his rivals. Only one other could go with him but it was to no avail as Aleezdancer hadn’t even moved into top gear yet. Kevin asked him to really put the race to bed inside the final furlong and the lead suddenly burst wide open, going from around 1 length to as far as he liked. Aleezdancer powered through the group, up the stiff finish and was just putting daylight between himself and his rivals. Bolting up, the gelding won by 6 1/2 lengths and it was a number that could have been whatever he wanted. 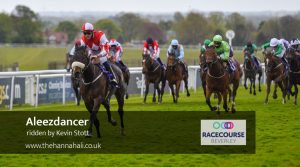 It was a very impressive performance form Aleezdancer and he really took a step forward from his debut. The easier ground looked to be more to his liking and he travelled unbelievably well. When Kevin asked the gelding to quicken he did just that and was galloping all the way through the line. Whether he steps up in trip next time out will all depend on options but 6f certainly looks likely to be his trip. Although they have enjoyed winners in syndicates, John and Allison Matthews were gaining their first success in their own colours. It is always special and it was fantastic to deliver for them, as well as Kevin’s old boss Mr and Mrs Berry who own half. Where Aleezdancer goes next will be interesting but he is certainly on the right tracks after this win.