You Are Here: Home > About Us > The Team

There are many aspects of being a great trainer, but one of the most valuable is having a good team. Kevin will be the first to admit that without the hard work and support of his staff, he would not be able to do what he does.

Kevin has always been fortunate to call upon many jockeys who have enjoyed great success throughout the years. Although he is not employing a stable jockey at the moment he has the enviable position of relying on a team of jockeys who mix experience and youth. There is a great tam of lads who ride the majority of the horses at Hambleton Lodge and can be seen riding out most days. This gives them a feel for the horses both on and off the track and it has proved to be a invaluable, producing plenty of winners for both trainer and jockey. Below are the jockeys you will see on board most of Kevin’s horses. 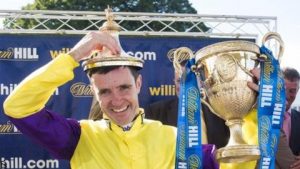 Having been one of the Northern stalwarts for many years, Tom is finally gaining the recognition he deserves. One of the strongest jockeys you will see in the saddle he has been one of the most popular jockeys to use in the North. Enjoyed his first success at the top level when steering Tangerine Trees to Group 1 success in the Prix De L’abbaye. Having struck up a fine partnership with Brando, winning the 2016 Ayr Gold Cup, they have gone on to Group success winning the Gr 3 Coral Charge, Gr 3 Abernant and making a top level break through when stylishly taking the Gr 1 Prix Maurice De Gheest.

Having started out his riding career at Hambleton Kevin quickly developed into one of the best apprentices around. He moved to Newmarket where he continued to impress riding for the likes of Godolphin and Luca Cumani. Having moved back to Yorkshire in 2016 he picked up where he left off and soon started to fire in the winners. Having ridden his claim out he is now into the professional ranks and earned his first ride in a British Group 1 when he partnered Goken in the Haydock Sprint Cup. Stylish and confident in the saddle, he is seen as one of racing’s future stars.

Having begun his career with Tommy Stack, Shane arrived in England with 30 winners under his belt and and the hunger to learn. In the two years he has been at Hambleton Shane has become a familiar name in Northern racing and in 2015 rode his claim out to become a fully fledged professional. He continues to improve and impress with his style and strength in the saddle and has now cemented himself as a vital part of Hambleton Lodge. Quickly developing into one of the leading young jockeys in racing and has caught the eye of many owners and trainers. Shane rode his first listed winner at the beginning of 2016 when steering the Ed De Giles trained Frosty Berry to victory at Nottingham, the first of many big wins.

The leading northern jump jockey and one of the best in the country, Brian has rapidly built up a reputation as a top class jockey. One of the most stylish and well rounded jump jockeys, he is now getting the recognition he deserves and the big winners are beginning to come. Although attached to Malcolm Jeffersson he is under big demand from all trainers and rode his first century of winners in the 2014/2015 season. Now he is one of the main rivals for the jump jockeys championship and is widely regarded as a possible future champion. Brian rides most of Kevin’s jumpers and is in regularly to help with the schooling of new jumpers, where his expertise has proven invaluable.

Assistant – Adam Ryan – the son of Kevin, he delved into the world of racing after his higher education. To gain some valuable experience he spent a year with breeding experts Coolmore. Working along side the team has enhanced his knowledge of the sport, hopefully enabling him to one day follow in his father’s footsteps.

Yard Manager – Steve Haworth – an integral part of the team, Steve oversees the everyday running of the yard. Whether its breaking in yearlings or bandaging a leg, his years of experience and horsemanship ensure the operation runs smoothly.

Yard Manager – Ray White – after a career as a jump jockey, Ray went onto work for some of the biggest names in racing. Stints with M.Channon and J.H.Johnson has given him the invaluable experience that make him a great asset to the team.

Secretary – Helen Blacker – has been with us since 2006 running the office, answering the phone and keeping owners informed of entries and declarations. Another important member of the team.

Farrier – Toby Pedley – Everything starts from the feet and it is vital for the horses to ensure they can be trained to their optimal peak. With over 120 horses Kevin is fortunate to have two highly skilled farriers who maintain, check and shoe the horses allowing them to perform to their best.

Steven Hillen – Steve has always been a keen racing enthusiast. After many years working in the racing industry, his vast knowledge of the sport landed him the job of assistant to Paul Cole. After much success with one of the best trainers around, he went on to pre training horses and later into the bloodstock game.

Steve Hillen has now built a reputation as being one of the best in the business and his ability to spot potential in young horses is second to none. Along with Kevin, they have created a formidable partnership. As a bloodstock agent, Steve’s objective is find the best horses from the thousands seen every year. Winners equal success and with horses such as; Bapak Chinta (gr2 Norfolk) Bogart (Redcar 2yo trophy) African Skies (gr3 Princess Margaret) Balmont (gr1 Middle Park) Blaine (gr2 Gimcrack) Astaire (gr2 Gimcrack,gr 1 Middle Park) and many more, he has proved year after year that he is at top of his profession.

Recently Steve broke new ground when The Grey Gatsby took the Group 1 Prix Du Jockey Club, giving himself and Kevin their first classic success. It showed once again what a great partnership they have and the future looks bright with Steve looking for the next stars.

Becky Hillen – With so many horses to see during the sales it is an impossible task for one person. Becky works the sales with Steven and her keen eye for a horse is invaluable to Kevin. Having worked in racing she knows how to spot a nice horse and her tireless efforts during the sales season has led to plenty of nice horses arriving at Hambleton Lodge.

With such an impressive strike rate of winners you can take a look at all the success stories that Steve and Becky have sourced – www.hillenbloodstock.co.uk

Not only is there a great team in place at Hambleton Lodge but Kevin also works alongside some of the best medical professionals in the sport. With their help it ensures every horse has the best care possible to maintain their health and well being.

Vet – Peter Hynes MVB MRCVS – After qualifying from the University College Dublin, Pete gained vast experience working in Australia, Dubai, Britain and the USA. He set up the Yorkshire Equine Practise and was soon working alongside Kevin bringing his knowledge to Hambleton Lodge. He is in the yard regularly to keep up to date with all the horses well being and his enthusiasm for the sport means he has a great working relationship with Kevin, ensuring the horses are always in their peak physical condition.

Back Specialist – John Patterson – With all the stresses and strains the horses go through in their training it can cause aches and pains which always need attention. John is one of the best in the business with a great understanding of the horse’s anatomy. Always on hand to check problems and apply any therapy required, his techniques can transform a horse in minutes and have them back to moving like a ballet dancer.

Dentist – Chris Napthine – The teeth are an area that can affect so much in a horse’s training so it is important to maintain them. Chris is regularly up at the yard maintaining the teeth and helping to prevent any problems from occurring. With some of the most up to date equipment the horses are cared impeccably and this shows with their health, happiness and results on the track. No stone is left unturned and Chris has the knowledge and patience to ensure that each horse receives the best treatment available to them.